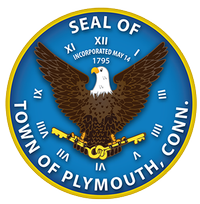 The design of the town seal represents Plymouth's historical past, while looking toward the future. The universal themes of majesty and industry are represented by the American Eagle in the center. The eagle's open eye and upturned head depict looking to future growth, while preserving a rich industrial past. The keys in the eagle's talons symbolize the lock industry in the Terryville section of town. The manufacture of locks was a major industry until 1976. The roman numerals around the eagle represent the clock industry. The manufacture of clocks by Eli Terry in the early 1800's was an important part of Plymouth's past. Today, an Eli Terry pillar and scroll clock is much sought after by antique collectors. There was no official seal in use before Mrs. Lois Karr of Plymouth designed the seal in 1968. Mrs. Karr's initials can be found under the right wing of the eagle. Finally, the date of incorporation, May 14, 1795, appears above the eagle's head.